Davines France makes employees aware of the value of the environment

In 2019, the Davines Group’s French branch launched a project to raise its team’s awareness about the importance of forests and individual behavior in combating climate change. Firstly, steps were taken to contain and offset the CO2eq emissions generated by trips made by the sales network. In collaboration with Wenow, a digital solutions company that specializes in this field, the CO2eq emissions of the car fleet were measured, advice was shared on how to mitigate them and, finally, residual emissions were offset through the company’s EthioTrees project dedicated to soil and forest regeneration in Ethiopia. At the same time, colleagues were involved in an environmental voluntary activity in the Saint-Germain en Laye forest, a natural area of interest due to its ecology, fauna and flora, which extends to the outskirts of Paris and was severely damaged in 1999 by a violent storm. Since natural regeneration has not proved sufficient to restore the ecosystem, the French team, in collaboration with Wenow, contributed to restoring the forest’s equilibrium by planting new trees. 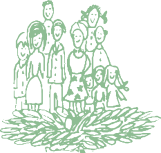 Find all the publications relating to our commitment to sustainability in the resources section.